An unusual type of trailer for Nitto Belgium

Transuniverse Forwarding has been using a new type of trailer for Nitto Belgium for a few weeks now. It is an unusual temperature-controlled closed-box semi-trailer with sides that open completely for loading and unloading long and very fragile rolls of film from the side. The films are transported from Spain to the Nitto factory in Genk. There they are processed into Coated Glass Protection adhesive tape and distributed worldwide.

One of the flagship products of this Japanese producer of industrial adhesive tapes and sealants is Nitto CGP film. This is used to protect architectural glass during production. Modern buildings and skyscrapers are increasingly using solar control glass, which is given a series of responsive nanocoatings to make it super-insulating. However, these coatings are so fragile that they are protected with CGP adhesive tape.

Nitto has been producing such CGP film in Genk for over ten years now. Until recently, these rolls were 2.6 metres wide. According to Stefan Maussen, Managing Director of Nitto Belgium, the construction industry is increasingly demanding wider glass panels. “3.3 metres is becoming the new standard. So, in Genk we have invested in a new and globally unique production line for wider CGP adhesive tape. This ‘M-Line’ was put into operation early this year,” he explains.

“We buy the base film for our CGP film in Spain. To that base film we apply an adhesive and custom cut the product in our factory in Genk. From here the film is then distributed worldwide for the glass industry,” explains Marc Bielen, General Manager Supply Chain at Nitto Belgium.

The rolls of base film leave Spain in special reusable crates loaded into a semi-trailer in which the temperature is kept between 10°C and 25°C to ensure the quality of the product. “As the rolls are wider, the crates are also larger. They are now 3.6 metres wide and weigh 3.5 tons. They cannot be loaded and unloaded in a closed-box semi-trailer through the rear door. So we have to do that from the side. Transuniverse was therefore willing to invest in semi-trailers that can do this,” adds Marc Bielen.

“The semi-trailer was ordered from the Finnish trailer producer Ekeri, one of the few manufacturers in Europe to specialise in closed-box semi-trailers with side openings. Three crates are loaded into each side of the trailer, which equates to around 20 tons. The vehicle departs for Genk from Spain every Thursday. It is unloaded on Monday and on the same day loaded with conventional groupage shipments from Nitto Belgium that are destined for Spain. This therefore allows us to organise round trips and to provide a perfectly sustainable transport solution,” says Frederik Boon, Operational Project Manager at Transuniverse Forwarding. 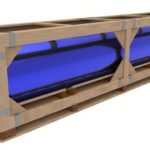 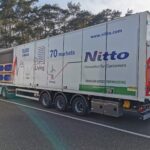 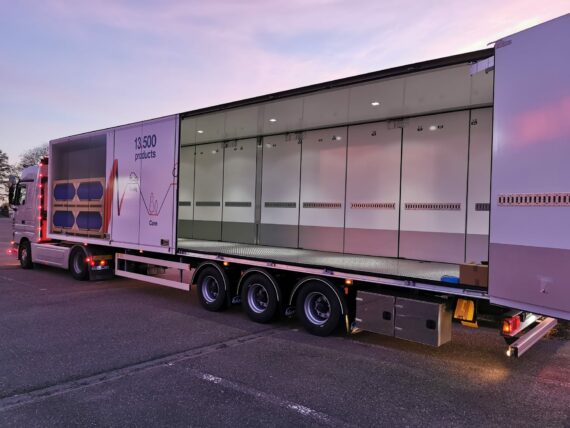