Country in the spotlight: Switzerland

Switzerland maintains very close links with the European Union, but is not a member. This makes transport operations to and from the country more complicated than with EU countries. It requires knowledge and experience, including in the field of customs. Transuniverse Forwarding, which has been operating groupage traffic to and from that country for more than 20 years, has that knowledge and experience in-house.

“Switzerland is a more difficult destination than it appears. It’s not only because specific customs rules apply, but also because the traffic is not balanced. Exports to the country considerably outweigh imports. That is why we have a specialist team in Wondelgem. We also work with a local agent, M+R Spedag in Muttenz (Basle), with whom we have developed an excellent partnership,” Wim De Meuleneire explains. He is responsible for exports to Switzerland within Transuniverse.

Transuniverse organises 15 to 20 departures a week, which means that at least two groupage line trucks are deployed with our permanent subcontractors every day. Groupage traffic goes to two M+R Spedag depots in Kaiseraugst (Basle) and Schaffhausen, which organises the end distribution. Full shipments and large partial loads are delivered directly to the customers.

The trucks travel via the border crossings in Saint-Louis, Thayngen or Vallorbe for the handling of the customs formalities. “Good preparation is always needed, because the customs and police checks are stringent. We have permanent customs brokers within Transuniverse with knowledge of the Swiss rules, to brief customers on the paperwork,” Wim emphasises.

“To keep our traffic as balanced as possible, the role of the agent is important. We therefore bring back groupage consignments for M+R Spedag bound for Belgium. The trucks also stop in France or Germany to load up. Dirk Ghys is our man responsible for imports,” he says.

Switzerland has a thriving economy, although it has come under pressure in recent years. It is based on highly skilled labour and a well-trained workforce. The focuses are on financial services, insurance, high-tech, the chemical and pharmaceutical industry, manufacturing (machines and precision instruments), food and tourism.

Despite its location in the heart of Europe and its close links with the EU and its Member States, Switzerland is not a member of the European Union. Membership was rejected by a majority of the Swiss in a referendum in 2001.

Nevertheless, the EU and Switzerland have a close trading relationship. Over the past few decades many barriers have been removed thanks to a whole series of agreements. The country is also one of the four nations in the European Free Trade Association (EFTA), alongside Liechtenstein, Norway and Iceland.

Like Belgium, Switzerland is a nation that is strongly dependent on foreign trade. Until 2015, exports were boosted by the Swiss National Bank through a minimum exchange rate of 1.2 francs to 1 euro. This measure was intended to protect the Swiss currency from a sharp rise against the euro. However, the National Bank was forced to halt the measure, because the policy proved too expensive. Since then, the franc has risen against the euro. The franc is even expected to evolve to parity with the euro in the medium to long term.

That intervention in 2015 was not without consequences: exports waned and incoming tourism dwindled. Switzerland has now partially recovered and exports of machines, electronics, chemical and pharmaceuticals have seen growth.

However, the Covid crisis dealt the economy another blow. GDP fell last year by 5.3%. Three main factors were responsible for this: the lack of consumer confidence, the fall in domestic investments and the drop in exports. The economy has recovered in 2021, with growth expected to hit 3.6%. The prospects for the coming years are fairly positive.

Switzerland in a nutshell

Head of Government: the Federal Council, presided over by Guy Parmelin 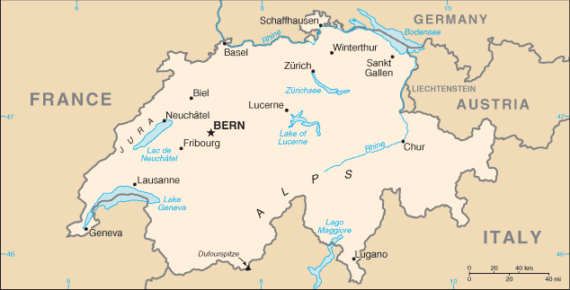