Together with our Turkish partner Ekol Logistics, Transuniverse Forwarding is to develop a 40-hectare multi-modal site at the Kluizendok in the Port of Ghent, a few kilometres from our current facilities in Wondelgem. We will enormously increase our groupage capacity here, and also build up an inter-modal hub. Our Chairperson Frank Adins and Daan Schalck, CEO North Sea Port, signed a letter of intent on this matter in July.

We currently use an 8,000-m2 crossdock centre in Wondelgem for our groupage shipments from and to the whole of Europe, North Africa and the Middle East. This capacity is no longer adequate, due to the growth in traffic over the past years.  We have therefore taken up an option on a 10-hectare site to build a new crossdock centre of 20,000 m². According to current plans, it will be operational at the end of 2021.

In addition, we have taken up an option together with Ekol Logistics on a 20-hectare site where we can build and operate a rail terminal. This infrastructure will be a completely new development. It will be used for inter-modal shipments by Ekol Logistics, Transuniverse Forwarding and third parties.

Ekol Logistics already runs a number of train services in Europe and wants to expand these shipments to other destinations. The new site in Ghent will become a hub for inter-modal shipments between Spain, Greece and the Maghreb countries on the one hand, and the United Kingdom and, at a later stage, Scandinavia on the other. Transuniverse will tap into these capabilities to expand its own inter-modal services as well.

Roll on, roll off terminal

But it doesn’t end there. Because containers and trailers bound for the United Kingdom will be shipped by sea, we are going to build a roll on, roll off terminal at the head of the Kluizendok together with Ekol Logistics. We intend to place the operation of this terminal in the hands of a third party. Negotiations are already in train.

There are major growth opportunities for short sea shipments between Ghent and the UK: Brexit is expected to lead to congestion in the Channel ports. This means that opportunities will arise to run sea shipments to more northerly UK ports, in combination with rail services from and to inland Europe. As a result, Transuniverse will be able to expand its inter-modal service provision even further.

Transuniverse currently handles around 300 lorries and inter-modal containers per week at Wondelgem. Thanks to the new facilities at the Kluizendok, we expect to double these shipments within around five years. 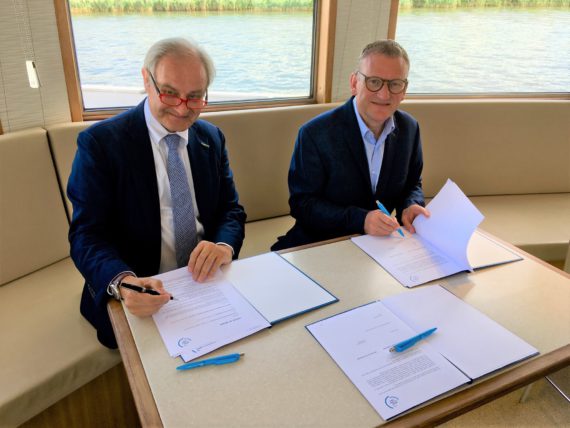