Country in the spotlight: France

In February 2018, Transuniverse Forwarding opened a subsidiary in France, in Garonor near Paris. Today, less than two years later, Transuniverse France is a solid organisation with three offices and around twenty employees. “Transport to Belgium and North Africa were the main drivers of this success, but the European groupage services and Air & Sea also played a part”, according to Hervé Caplier, Director of Transuniverse France.

“The activities got off to a quick start. Growth did come to a standstill however between March and June due to the health crisis, which had consequences for the whole activity. Over the summer, we were clearly able to resume our transports, although this was impacted again by the second lockdown”, Hervé Caplier remarks.

Transuniverse France’s head office is in Paris-Garonor, where twelve people work. The Lyon branch has five staff and in Rijsel there are two.

The agency in Paris receives a daily shuttle to and from Belgium. In synergy with the head office in Ghent, Transuniverse France is therefore able to develop not only the transport to the Benelux, but also to Northern and Eastern Europe. The groupage transports to and from Southern Europe are being developed directly through partnerships in Italy, Spain, Portugal, Greece and Switzerland among others.

The second market is Tunisia, with 8 to 10 lorries each week (import and export). It is serviced by Transuniverse France’s three sites.

Morocco is also a specialist area , with 5 lorries a week. Furthermore, Transuniverse Morocco was founded at the same time as Transuniverse France.

The transport to and from Turkey is also important.

“Transuniverse France’s volumes in terms of sea and air freight have been increasing significantly since the recruitment of an Overseas Specialist last May. She is developing these streams on all three platforms in France”, Hervé Caplier explains. “Overseas groupage now represents 15% of our activity. So, we handle between 30 and 50 sea containers per month. The number of air-freight clients is also increasing, these include the airports of Paris-CDG, Lyon-Saint-Exupéry and Lille-Lesquin”.

“In parallel with that, we are developing customs services. Since its foundation, Transuniverse France has had authorisation from French Customs. The three platforms are therefore also set up as customs warehouses. Today, the Customs Service handles around 800 customs clearances per month”. 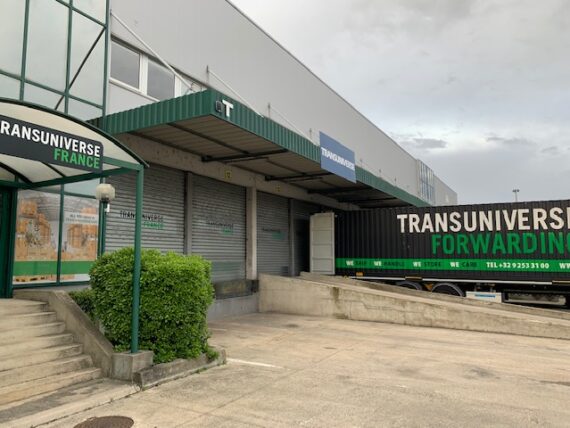