Country in the Picture: Greece

Since as far back as in early 1983, Transuniverse Forwarding has been active in groupage traffic to and from Greece. With an average of twenty lorry departures per week, our company can present itself as the market leader in groupage between Belgium and that country. We owe this position not only to the short transit times, but also to the excellent service we have been able to develop with two strong agents.

“Groupage traffic to Greece is very export-oriented: as much as 90% of our volumes are exports and only 10% are imports. Most destinations are in Athens and the surrounding area, where most industry is located. They represent approximately 80% of our traffic. The remaining 20% departs for Thessaloniki and other destinations in the north of the country”, says Pascal Willaert, Manager Greece & Maghreb at Transuniverse.

“The goods we transport are extremely diverse, which is typical of groupage: palletised goods, furniture, chemicals, ADR products, textiles – you name it. Depending on the season, between 18 and 25 trucks per week leave for Greece. So, thanks to the large volumes and extensive clientele, we are able to provide three to six departures a day and offer a transit time of only seven days, which is exceptional in that country”, he adds.

Although the Greek economy was hit hard by the credit crisis during the past decade (see below), Transuniverse’s shipping activities held up well. Since regaining stability, the country is once again on the rise. “This was partly due to the excellent cooperation with our agents GR Samson in Thessaloniki and Logika in Athens. The latter company, Logika, in particular gives us a competitive advantage in such an important traffic sector. That company – like Transuniverse – is in the process of digitalisation under the impetus of its young CEO. He has a very dynamic vision of transport and logistics and sees the growth opportunities offered by investment in IT. Logika also has an excellent distribution network within a 150 km radius of Athens, where most economic activity is located”, adds Pascal Willaert.

Emerging stronger from the credit crisis

Exactly 12 years ago, in May 2010, the Greek sovereign debt crisis erupted. This severe crisis, which incidentally affected the rest of the euro area, threatened to bankrupt Greece. The EU and the IMF came to the country’s aid with loans, but in return was forced to drastically reduce its budget deficit and speed up the modernisation of its economy. It was not until 2018 that the crisis was overcome and Greece was able to stand on its own two feet again. But the toll was great: in those years, the economy shrank by a quarter, while the purchasing power of the Greeks almost halved due, among other things, to the sharp increase in taxes and the reduction of pensions.

However, the timid recovery (with growth of 1.9% in 2019) was thwarted by the pandemic. This was partly because one of the strongholds of the Greek economy, tourism, was hit straight in its heart by the coronavirus pandemic. The result: GDP fell by as much as 9% in 2020.

In 2021, the tide has already turned, with growth of over 8%. From the beginning of the pandemic, Greece was indeed characterised by effective policy, also supported by the rapid digital transformation of the public and private sectors that had started at the end of the crisis. The Greek transformation plan drawn up after the crisis to revitalise the country and make its economy more resilient comprises four pillars: in addition to digitalisation, these are the green transition, the modernisation of employment and the stimulation of private investment through the transformation of the economy.

Originally, the growth forecast for this year was 4.5% to 4.9%, but due to the increase in energy prices and the war in Ukraine, these expectations have been revised downwards. The Greek government is now assuming economic growth of 3.1% in 2022.

Still, despite the recent uncertainties, the Greek economy seems to be holding up well: the structural reforms after the financial crisis and the transformation plan have effectively made the country more resilient. Greece is now even considered credible on the international markets and has also become an attractive investment country for certain sectors.

Greece in a nutshell 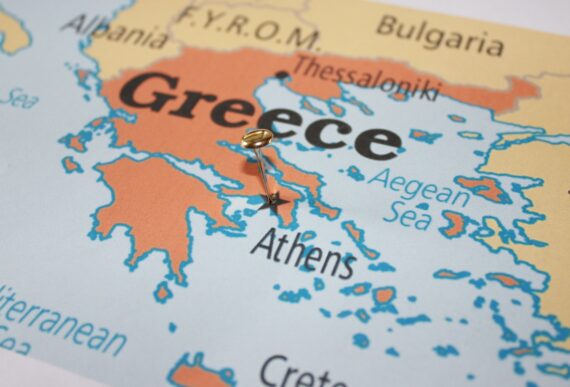