A healthy mind in a healthy body

Getting enough exercise is good for body and mind. Those who exercise regularly experience less stress, feel more relaxed and are more resilient. Sport also enhances job satisfaction. That’s why Transuniverse wants to invest in promoting exercise and sport.

We generally spend more than a third of our time at work. All the more reason to think about our health in the workplace as well. This can be done in different ways. By promoting healthy food and drink, for example. Water, tea and coffee are free for everyone at Transuniverse, for instance, but soft drinks are not. We also recently organised a ‘health day’.

This can also be done by taking more exercise. “Employees have free access to a fitness room with showers in the basement of our building during the morning, afternoon and after hours. We also recently launched an initiative for going running in groups in the afternoon guided by the ‘Start to run’ app,” says Elfi Van Goethem, HR Specialist at Transuniverse.

Taking exercise and playing sport together is also good for team spirit within a company. A team from Transuniverse, for example, recently took part in the football tournament organised by our customer SSC – for the first time since the Corona crisis. More than 20 companies competed against each other in Edegem. Our team – with members from the various departments – played five matches that day, winning three of them,” says Elfi.

Two teams from Transuniverse also took part in the CAAAP Triathlon in June in Kortrijk, a major sporting event for both individuals and companies. Each team consisted of three employees, all of whom had registered for one discipline (running, cycling or swimming). “Several of their colleagues came along to Kortrijk to encourage them with their enthusiasm. Even those who don’t play any kind of sport can actually contribute to the group feeling!” it would seem. 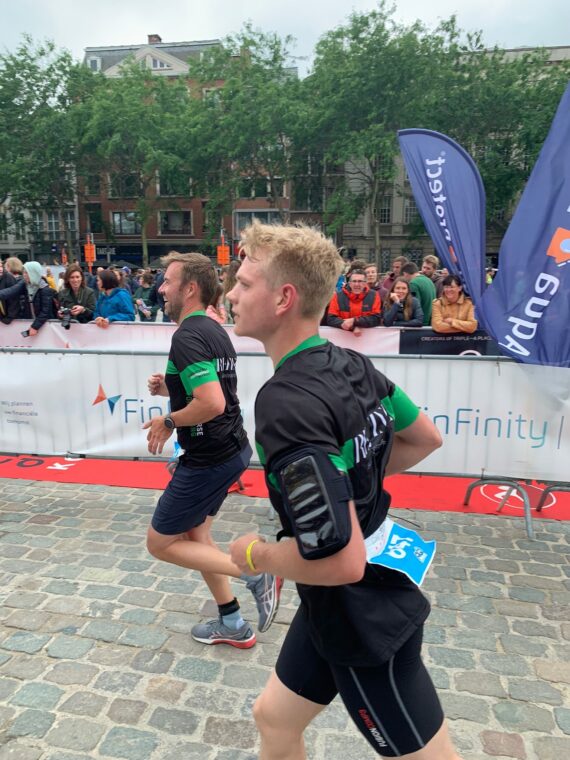