Countries in the spotlight: Spain and Portugal

As you can read below, the impact of the pandemic on the Spanish and Portuguese economies was particularly significant. “Since Transuniverse is one of the top players in groupage to both countries, we were able to keep the frequency of departures quite high at that time despite the circumstances. When the economy rebounded and manufacturing companies returned to work, we were able to quickly increase them again. Today we are reaching the levels we were at before the Covid crisis, with around 40 departures a week to the various corners of Spain and around 30 departures a week to Portugal,” says Alexander Bekaert, Export Road Manager at Transuniverse Forwarding.

“One of our strengths is that, in Spain, we can rely on the network of four trusted agents – Ekol, Argitrans, Carcaba and Altrans – who provide fast fine-meshed distribution. While many of our competitors rely only on hubs in Barcelona and Madrid, we also have hubs in Irùn, Zaragoza, Valencia, Gijón (Asturias) and Vigo (Galicia). The latter two destinations tend to have less coverage from Belgium, but by combining shipments with those to Portugal, we can still offer short transit times,” adds Tom Van Wassenhove, Traffic Manager Iberia.

“Spain is a vast country. But thanks to our well-developed agent network, transit times are usually just three to five days, depending on the hubs and the final destination. Even to Galicia, the transit time is only six days,” Alexander stresses.

“In Portugal, we have been working for 39 years with Grupolis, which has depots in Lisbon and Porto and handles local distribution. For the scheduled services between Belgium and Portugal, we have been using the same regular Portuguese carriers for years, which means advantages in terms of things like reliability, communication and, above all, capacity,” Tom adds.

Since August, Transuniverse has also been testing intermodal transport to Portugal, particularly by using shipping. Twice a week, trailers take the boat on the ro-ro (roll-on/roll-off) Zeebrugge-Porto scheduled return service. By doing this, we are alleviating the driver shortage somewhat and reducing our carbon footprint at the same time.

Both Tom and Alexander point to the driver shortage in Europe putting pressure on capacity. It’s also having an impact on the cost of transport to Spain and Portugal. “However, the scarcity of transport capacity is only one of the aspects increasing costs. Even if the economy in both countries cools down – the first signs are already being felt – and capacity picks up a bit, prices will actually remain high: this is not only caused by the price of diesel and inflation, but also by other costs such as wages (due to the driver shortage), tyres, tolls, and so on. So prices will remain permanently high and even increase,” they warn.

During the corona crisis, Spain was one of the countries in the European Union whose economy was hardest hit. This was largely due to the importance of tourism and related services in its gross domestic product (GDP). Another record 83 million tourists visited Spain in 2019. When the pandemic broke out, that number fell to less than 20 million in 2020, resulting in the country experiencing the worst contraction in the EU (-11.3%) that year. In 2021, tourism and services recovered marginally but, this year, figures are almost back to pre-Covid levels.

That means the economy will have grown by just over 4% in 2022, the National Bank of Spain predicts. That is more than in Germany, France, Italy or the UK. By comparison, the Federal Planning Bureau forecasts 2.6% growth in Belgium this year. Yet Spain’s economy – like that of many other Member States – is now flirting with recession as growth was recorded mainly during the first two quarters.

Growth in Spain is expected to slow further in the first half of 2023 due to disruptions caused by the war in Ukraine, high energy prices, reduced business and consumer confidence, as well as high inflation. From mid-2023, energy price pressures will partially ease and activity will gradually pick up thanks to a moderate upturn in consumption and further normalisation of tourism.

What will also come into play next year is the European ‘Plan for Recovery and Resilience’: Spain will receive a total of 70 billion euros in aid from this fund. The country is the second largest beneficiary after Italy. The money is go towards investments in the green and digital transition, which will help modernise the Spanish economy. This should have a positive effect on one of Spain’s biggest concerns, namely high unemployment. Two years ago, it was 16%, eventually falling to 12%. However, that is still the highest in the EU.

According to European Commission expectations, Portugal will do even better than Spain this year although there are signs of growth slowing towards the end of the year here too. In fact, the country will have the highest growth rate in the whole EU, at 5.8%. Here too, the revival of tourism and related services plays a key role. Incidentally, exports of services have risen above pre-pandemic levels and made a significant contribution to growth with an increase of about 70% year-on-year.

However, GDP growth is declining abruptly due to disruption in the energy and food markets. Although private consumption has continued to grow – albeit at a slower pace – investment is contracting on the back of falling business confidence, rising prices and higher interest rates. Still, inflation is not too bad in Portugal, with 6.3% expected this year.

The various indicators therefore point to weaker growth prospects for the second half of 2022 and early next year. The forecast for GDP growth in 2023 is only +0.7%, as the negative impact of higher energy prices outweighs the strong rebound in tourism.

An additional drag on growth – not only in Portugal but also in Spain – is climate warming: the severe drought the Iberian Peninsula is experiencing could have long-term consequences for agriculture and food exports. 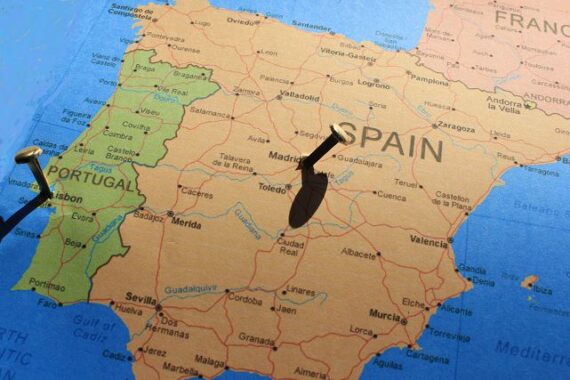